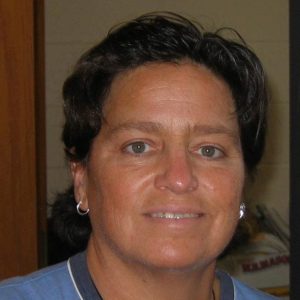 Having grown up in an era that did not provide many athletic opportunities for girls, Kathryn volunteered during high school and college summers (1978-1981) coaching Lassie League Softball in her hometown of Chatham, MA.  Upon graduation from, American International College, she launched her coaching career in the fall of 1983 as a junior varsity field hockey coach, middle school girls’ basketball coach and assistant varsity softball coach all at Chatham High/Middle school.

After starting as a middle school basketball coach, Kathryn coached girls’ jv for one year, then coached the varsity from 1990-1997.  While at the helm, she started a kindergarten/first grade basketball program through the recreation department. Additionally, she worked at the Girls’ Cape Cod Bay Basketball Camp from 1991 through 1997.

Kathryn served as assistant softball coach from 1983-1987 taking a year off to try to revive the Cape Cod Community College softball program. She was named head coach.  Unfortunately the college ended the program the next year so she returned to Chatham High and resumed an assistant coaching position until she was named varsity coach in 1991, a position she held until 1997.

“You will not find my achievements in any record books and they are not measured by my win/loss record or the number of Division I athletes that I have produced.  Rather my major achievements have been helping develop confident, strong, committed, driven, resilient and compassionate young women.  My achievements are every single student/athlete I have ever coached and taught.  I have seen them become mothers, fathers, teachers, doctors, lawyers, nurses, marine biologists, fishermen, writers, actors, chefs, tailors, clergy and soldiers. The list goes on.  Their legacy lives on in their children some of whom I got to know and teach at Monomoy Middle School.”