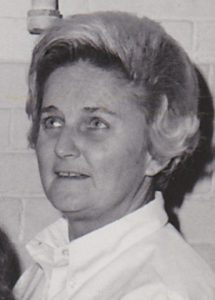 “I graduated from Bridgewater State College with a degree in Health and Physical Education and teach Health Education still today.  Mary DeLorey, after playing volleyball in college, has gone on to become a state referee in the sport as has Patricia Brady Cawley who graduated from Boston College.  Mrs. Thomsen inspired most of us during our awkward teen years to excel not only in the classroom but also on the court.  Girls’ sports were just getting started… remember the rover in basketball???!!  Mrs. Thomsen had us in the gym before school and after school five days a week.  She expected excellence and usually got it.  In everything from park league to United States Volleyball Association tournaments.  Most of the team members during my tenure at Latin went on to play volleyball in college due to her mentoring.

I know that many of us would not be where we are today if were not for Mrs. Thomsen.  She taught physical education classes of 80 girls in white shirts and bloomers (I’ll never forget Chicken Fat!), and coached us year-round to become top female athletes.  Mrs. Thomsen should be considered for induction into the Hall of Fame.”