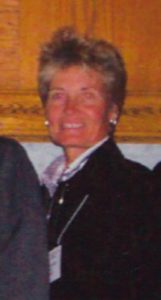 Mary is currently a teacher of physical education and a field hockey, basketball, and softball coach at Rockport High School where she has been for twenty-two years.  She is also involved in the Futures Program and with the Bay State Games.

Her team records for basketball and softball are not available, but she does know that her field hockey teams have recorded a 131-137-100 record from 1983 to the present.

“Athletics has been an integral part of my life – the values that I learned as a player are definitely values that I still believe in and instill in my players.  Commitment, dedication, integrity, sportsmanship, and hard work are important, not only in athletics, but in academics and life.”

“I try to encourage my players to play in college – finding the right school both academically and athletically can be challenging, but also very rewarding.  I think encouraging athletes to stride to be their best, ‘reach for the sky’ has given the players the necessary encouragement to take a risk – in most cases with a positive outcome.  I am extremely proud to see my former players succeed at the next level – the hard work and determination that they have displayed is rewarding for me and for them.  It is nice to see and hear that your work as a coach can impact a student-athlete in such a positive manner.”