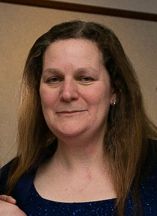 A competitive synchronized swimmer since 1975, Michal Fandel competed through high school and at Duke University from 1983-1987.  She describes synchronized swimming as “a combination of dance and gymnastics in the water.”  It suited her personality much better than swimming laps.
While completing her Masters program from 1987-2002, she also officiated and coached.
In 2012, she started a team in the Foxboro, MA, area that has grown from 8 girls to 30 girls ranging in age from 8 to 16.  In 2014 her team outgrew their first facility and moved to the Attleboro YMCA taking on the name Attleboro Y Lyonfish Synchronettes because of their association with the Wheaton College Synchronized Swimming Team in Norton, MA (The Wheaton Lyons) where they still practice on occasion.
Over her 40 years of involvement in synchronized swimming, Michal has risen to a Level 3F official, allowing her to judge at the local and regional level and at some zone level competitions, and to a Level 3 Coach, just below national team level.  She is involved in the New England South Association, serving as Technical Chair (2013-2017) and Officials Chair (2017-present).
A mother of triplets (identical twin girls and a boy), she has had the opportunity and pleasure of coaching her two 15 year old daughters on her team.  Michal has taken an inexperienced team and molded them into a strong competitive intermediate group, which has competed and placed in the USA Synchronized Swimming East Zone.
“It is very gratifying to see all that the girls have learned about life through this team” and their participation in synchronized swimming.