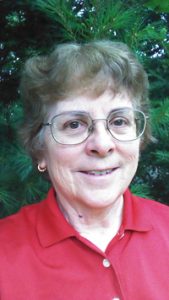 Alberta has been involved in sports her entire life.  After playing numerous sports in high school (field hockey, volleyball, basketball, softball, and track), she continued her playing career at Southern Connecticut State (field hockey and track) while earning a BS (1970) and Masters (1971) in Health & Physical Education. She played ASA softball for 8 years for the “Jimmie Girls” out of Schenectady, NY, and ran track for the Albany (NY) Track Club for 5 years.

From 1971 through 1983, Alberta taught health and physical education in the Douglas (MA) Public Schools and coached all the girls’ sports – field hockey, basketball, track & field, and softball.  She became an official in the early 1970’s working both high school and college contests in volleyball, field hockey, and basketball.  She continues officiating volleyball today and is a member of the Central Mass. Board of Officials, the New England Volleyball Officials Organization, and the Professional Association of Volleyball Officials.
Alberta has worked as a teacher, coach, and official for 45 years and still retains her officiating certification.