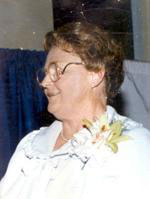 When Alice Sullivan was growing up, she dreamed about playing high school sports. She never realized her dream but, thanks to her dedication, thousands of young women have experienced the thrill of being a high school athlete. For more than five decades, Alice Sullivan tirelessly dedicated herself to helping girls enjoy the benefits of athletic competition.

As a student at Durfee High School, Alice’s work earned official recognition for the girls’ athletic club, although its establishment did not occur until the year after she graduated. At Bridgewater State College, she organized field hockey games between Bridgewater and other schools, giving Bridgewater its first exposure to intercollegiate women’s athletics.

In the early 1950s, Alice organized weekend swim programs for girls. Soon after, Alice and some friends who taught health and physical education began sponsoring “Intramural Playdays” for young ladies. Those playdays, where girls basketball and volleyball teams from five or six schools competed, were the start of what has become the Rhode Island Interscholastic League’s sports program for girls. This program now benefits more than 10,000 girls competing annually.

Success did not happen all at once, of course. It has been a step-by-step, year-by-year process, and Alice was there every step of the way. In the late 1960s, Alice convinced the Rhode Island Interscholastic League to put some girls’ sport competitions on its schedule. To ensure that female sports presented the same type of awards as the established boys programs, she sold candy and soda to pay the bills. Alice was never too proud or too tired to do the less glorious work needed to take a program from infancy to success. In 1972, there were 204 names on the rosters of 24 girls’ teams in two sports. When Alice retired, there were 426 teams in 14 sports–a figure that gives Rhode Island one of the highest participation rates in girls’ athletics of any state in the country.

Recognized both nationally and locally as an expert on women in sports, Alice was the first one to admit she had a lot of willing helpers through the years, but she was always the one on the front lines. One day she would be at a national committee meeting, and the next day, you could find her selling tickets at a game.

Alice Sullivan was a wife, mother, teacher, coach, administrator, and a one-woman public relations agent for girls’ sports. Thousands of women are thankful she championed their cause. Article from the RI Heritage Hall of Fame (inducted 2005)

Alice Sullivan is another strong supporter of athletics at Bridgewater State College in the forties who has gone on to great notoriety for her work in athletics in Rhode Island. Alice taught and coached in the East Providence School System for 34 years before her retirement in 1986 as an assistant principal.

In 1967 she was presented with the National J.C. Fitness Leadership Award by President Lyndon Johnson. Ms. Sullivan has been inducted into the East Providence High School, Rhode Island Aquatic, Durfee High School and Rhode Island Sports Hall of Fame organizations. She is greatly responsible for the high level of development that has occurred in women’s athletics in Rhode Island.

Ms. Sullivan passed away in November of 2003. She had been living in Riverside, Rhode Island.

Mrs. Sullivan was a retired physical-education teacher and former vice principal of East Providence High School. She was the first director of girls’ sports for the Interscholastic League, a position she held for 24 years. She also served as the league’s longtime assistant executive director, and was one of 11 people inducted into the league’s inaugural Hall of Fame this spring.

“To say Alice was a pioneer is true, but she goes beyond that,” Dick Lynch, the league’s executive director, told Journal sports writer John Gillooly, “She was a wonderful lady and very important to the history of the Rhode Island Interscholastic League.”

In a reflection the lowly status of girls’ athletics in 1975, Mrs. Sullivan’s appointment as director of the league’s girls’ sports program that year merited a one-sentence account on a back page of the sports section. But her retirement from that position 20 years later merited the front page.

Mrs. Sullivan began advocating for girls in the 1950s, when she and some other physical-education teachers began organizing intramural basketball and volleyball “play days” for girls in Rhode Island.

In the late 1960s, the all-boys Interscholastic League yielded to Mrs. Sullivan’s pressure and let girls in, but insisted that they pay their own way.. She set up a table and sold soda and candy to make up for scant gate receipts, and served as coach, supervisor, ticket taker and candy seller.

In 1971, pushed by the threat of a lawsuit by a Cranston West sophomore who wanted to play golf, the Interscholastic League told Mrs. Sullivan that it would officially recognize girls’ sports, and asked her to organize a state girls’ golf tournament. Three girls turned out, “but it was the start of girls’ sports in Rhode Island,” Mrs. Sullivan recounted.

A year later, Title IX went into effect, but she had already laid the groundwork for equality in women’s athletics. By the time she retired, there were 400 teams in 14 sports; girls’ championship games were drawing thousands to the Providence Civic Center.

She retired as East Providence High School assistant principal in 1986. She was also the former assistant athletic director, girls’ track coach and swimming teacher at the high school.

Her numerous honors include: 1983, the Rhode Island Board of Women’s Basketball Officials names its annual award for outstanding and dedicated service the Alice Sullivan Award; 1981, “Service to Women in Rhode Island,” by the Permanent Advisory Commission on Women; 1967, National Jaycees Physical Fitness Leadership Award, the first woman ever selected.