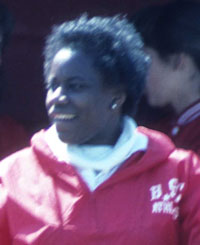 Andrea, a graduate of the physical education major program at Bridgewater State College, is the head varsity softball coach, the assistant basketball coach and the Director of Intramurals, Recreation, and Club sports

DeeDee has participated in extensive post=season/tournament play.  Her basketball teams have been NCAA qualifiers for 4 years (1983-1986), participated in the ECAC playoff in 1988.  Her teams were three-time ECAC tournament qualifiers (1985, 1987, and 1988).  For eight years, the Bridgewater women’s varsity softball teams were Champions of the MASCAC (Massachusetts State College Athletic Conference) (1984, 1986, 1988, 1990, 1991, 1993, and 1994) and for those same eight years her softball teams have been NCAA regional qualifiers.  They were the 1994 Northeast Regional Champions and the 1994 National Division III Runners-up in a double elimination tourney.