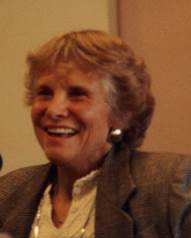 Ann, a 1954 graduate of Bridgewater State College, has been a teacher-coach in Rhode Island for over 25 years.
She has coached basketball, field hockey, softball, gymnastics, cross country, and track & field during her 36 year career.  In addition to coaching, Ann has served as a gymnastics judge at all levels – junior high school, high school, college, and at gymnastic clubs.  She has also held officials ratings in basketball and field hockey.

Ann has served on the Association for Girls and Women’s Sports and on the Rhode Island Interscholastic League sub-committee for girls’ athletics.  Since 1970 she has coached, been meet director, or official at every high school girls track, cross country, indoor track, and gymnastics championship.  Her teams have won many state championships in track, cross country, and gymnastics.

In 1988 she was inducted into the Bridgewater State College Athletic Hall of Fame.  She received a Meritorious Service Award from the Rhode Island Association for Health, Physical Education, Recreation and Dance in 1976.  In 1975 she was honored with the Rhode Island Athletic Director’s Outstanding Contribution to Girls’ Athletics Award.  She has been honored by having two meets, an indoor and an outdoor, named after her.