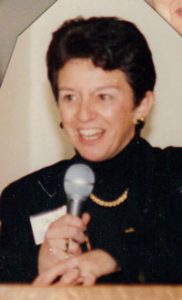 Dr. Ann Papagoitis is the Principal of West Bridgewater Middle/Senior High School.  Her role of principal allows her to be an active advocate for women’s sports, particularly when she is hiring coaches for women’s sports.  Ann is the current sitting principal on the District D (Mayflower League) Advisory committee of the MIAA.

For twelve years, Ann served as Head Girls Basketball Coach at Ipswich High School.  She amassed a 207-37 record.  She also served as an assistant coach, head recruiter, and game assistant at Bentley College; division Director of the Wayne Emory Basketball School; and Co-Director of the North Shore Girls Summer Basketball League.  For two years, Ann was the Head Coach for the Women’s Open Bay State Games.  As a public school assistant principal and principal, she has been an active advocate for Title IX.

Many awards and recognitions have been presented to Ann: Boston Globe Coach of the Year for 1980 and 1984; Salem Evening News Coach of the Year for 1980 and 1984; Agganis All-Star Coach; MBCA 200 Victories Award; and she was named the Cape Ann League Coach of the Year.
Ann also has three publications to her credit.  Pride is the Key to Success and Breaking the Press Without a Zone were published by Prentice Hall Coaches Clinics.  Her article, Where Have All the Coaches (Women) Gone? appeared in the Journal of the Massachusetts Association for Health, Physical Education Recreation, and Dance.