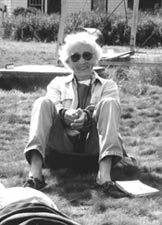 Barbara was a volunteer coach at Low Heywood School in Stamford, CT, from 1928 through 1936.  She also coached field hockey at the middle and high schools, and basketball for the town of Stamford, CT.

From 1930-1936, Barbara was a member of the United States Field Hockey Team.  She played in national and world tournaments in Denmark and in the United States.  In 1933 she played on a tour of Denmark, Germany, Holland, and Great Britain.  During the 1930’s, she served on the local selection committee.

While in high school and after, Barbara was taught field hockey by Constance Applebee at her camp in the Pocono Mountains.  During her high school playing years, she coached grade school girls.  Following her graduation from high school, she returned to assist with the high school players.  She spent many years playing and working with grade school children and, after the 1936 world tournament, she moved to Vermont.  “Years passed without any field hockey until Bev Osterberg, who was working to establish a field hockey program at Stowe High School knocked at my door.  She said ’I hear you know something about field hockey.’ The rest is history.”  Barbara worked for the development of and coached in the women’s field hockey program at Stowe High School for 25 years.

In 2001, Barbara, a member of the USFHA, was interviewed by Katherine Lee for a video funded by the USFHA – “Hockey is a Running Game.”