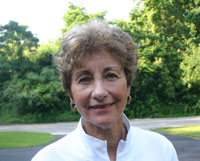 Barbara writes: “I have been very fortunate to do the things I most love to do …. teaching and coaching, and I have had a very successful career.”  In 2001, Barbara was the recipient of the State of Connecticut’s Outstanding Health Educator Award, and in that same year was selected as the National Health Educator of the year in Albuquerque, NM.  She has received two Celebration of Excellence Awards for Creativity in the Classroom – one of the most prestigious awards for public school teachers.

In 1974, Barbara Hall (at Stratford HS) and Lea Dickson (at Bunnell HS) filed a discrimination lawsuit against the Stratford Board of Education under Title IX.  Neither had tenure, but both felt so strongly about this issue that they took the risk.  Four years later, as a result of this lawsuit “the Legal Challenge”, coaches in Stratford were paid the same regardless of gender.  Barbara’s comment on this issue tells it all —- “I feel it is so important to stand up for what you believe in and have the courage to risk everything for what is right.”

Barbara Hall received the 1993 Marie Miller Stuart Award in recognition of her fight for equity in girls athletics – for the players and the coaches.