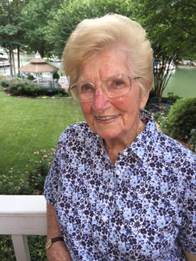 Betty is a graduate of Sargent College of Boston University.  She received her degree in physical education in 1945 and her Masters in Education in 1949.  She retired from the Weymouth (MA) school system in 1985 after 40 years of teaching and coaching.

Betty has been an advocate for girls and women, teaching girls sports at both the high school and college levels.  She is certified in swimming by the American Red Cross and coached 3 years at the college level and 10 years at her private camp on Cape Cod from 1951-1961.  She also coached girls’ varsity basketball, and her team was the Suburban League Champions in 1974.

She has been the recipient of many awards and honors. Those from Sargent College are among the most coveted: Twiness, Honor Aux, and Dudley Allen Service Award.  She won tennis championships in singles, doubles, and mixed doubles through the Weymouth Parks Department from 1964 to 1966.  She participated in activities sponsored by MAHPED, EDA, and AAHPER and served as a delegate to many conventions.