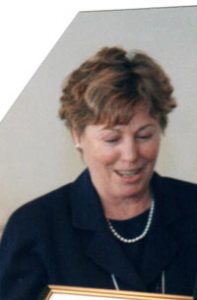 Beverly Hollingworth is currently sitting as a member of the New Hampshire Senate.  For many years she has been extensively involved as an advocate for WomenSport in New Hampshire.

“In 1991, I sponsored Senate Bill 85 establishing the study committee on Gender Equity in Sports, a first of its kind in New Hampshire.  Over the following 2 years, more legislation was initiated (SB331 and SB131) in order to study the issue in greater depth.

Our Committee’s original goals were to examine the athletic opportunities for girls in the state’s high schools and to determine the number of women in athletic leadership positions in those high schools.

Following a host of hearings and public meetings, our findings went well beyond our original goals.  Some of the information we discovered included: nationally, of all of the financial aid based on athletic ability, only one dollar in five was awarded to women.  Statewide, men’s sports received 18 times more media coverage than women did.  Only 17% of athletic directors were women and 245 of all coaches in 12 major sports in the state were women.  Overall, female coaches are paid less than their male counterparts and more likely to have one-year vs multi-year contracts.

The results of our study led to changes in women’s sports at both the high school and college levels in New Hampshire – the most impressive being the greater number of women participating in competitive sports which attract rising numbers of spectators and draw significant coverage by the media.

Throughout her position in the State Senate, Beverly has been an outspoken advocate for WomenSport.  “Every session day, the State Senate invites a variety of guests to the Senate Chamber to honor them for various accomplishments.  Our guests list has included Eagle Scouts, spelling bee winners and outstanding volunteers, just to name a few.  Athletes are also frequent visitors.  Over the years, I have invited women’s championship teams on both the high school and college levels to the Senate to that they may be recognized for being exceptional both on the field and in the classroom.  But of all the athletes who have graced the state house, the greatest applause came just last February when Tara Mounsey, Katie King, and Tricia Dunn visited shortly after winning the Olympic Gold Medals in Women’s Hockey.  The pride exhibited by the Legislature for the New Hampshire heroes was overwhelming and stood as a powerful reminder of just how far women have come in sports.”