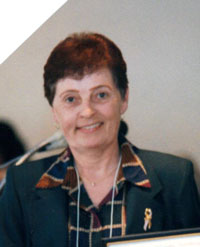 During her career, Bonnie has implemented sports programs for girls in Hartford, NY, and in Falls Village, CT.  For nine years, she coached girls’ Little League Softball.  She has been involved extensively in girls and women’s sport as an official in basketball and field hockey.  For 26 years, she has officiated on the high school and college levels in league games, post-season play and tournament play on the local, regional and national level.

As an expert official, she has trained, rated, and scheduled officials in both NY and CT.  Her ratings include a National rating in basketball that she earned while an undergraduate at UNH.  She also holds a sectional rating in field hockey and an ASA rating in softball.  She has worked extensively in post-tournament play, including NAIAA Division 2 and 3.  For six years she officiated tournament play for the American Deaf School Basketball tournament and championship games.  Bonnie has conducted seminars and training workshops for women’s field hockey officials in collegiate divisions 1, 2, and 3.

Bonnie has been affiliated with the CT Board of Certified Basketball Officials (honorary member), is a life member of the US Field Hockey Association, and a member of the Board of Directors of Edgewood Little League.

She is in her 24th year as director of tournament officials for the CT State Girls’ Basketball Tournament.  She is also a member of the CT Interscholastic Athletic Association for Women in Sport Committee.

Bonnie is a doctoral candidate in counseling at the American Institute, Irvine, CA.  In her private practice in counseling and hypnotherapy, she works primarily with student athletes.  She also continues to work with her local Little League as a consultant and official.