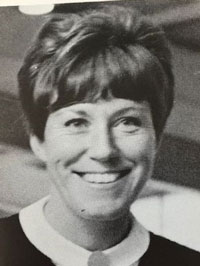 Carol is currently an Assistant Professor in the Department of Movement Science, Sport, and Leisure Studies at Westfield State College.  She has been actively involved in coaching and officiating volleyball since 1964 when she organized and coached the first women’s varsity volleyball team at Bristol, CT, Eastern High School.  In 1969 she organized and developed the first women’s varsity volleyball program at Westfield State College, coaching both varsity and junior varsity at eh college until 1974.  She was also responsible for volleyball officials for the Holyoke Park and Recreation Department.  She continues to officiate and conduct volleyball officials’ training renewal clinics in Western Massachusetts.

Her high school and college teams have participated in numerous regional tournaments, winning the championship in Bristol in 1966 and placing second in 1965.  In 1973, her team qualified for the first EAIAW Regional Tournament at the University of Rhode Island and the Invitational Regionals in Brockport, NY.  Her Westfield team won the Massachusetts State College conference in 1970 and 1971.  They were selected to participate in an Invitational Tournament in Salisbury, MD, in 1973.  Carol has also served as a clinician at numerous clinics and camps for volleyball coaches.