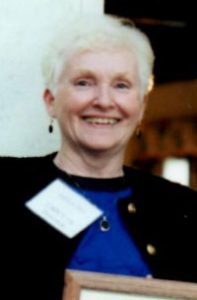 Carolyn has been affiliated with the Connecticut Shoreline Tennis League (1974-1984), the Independent HCC basketball league, which she was instrumental in starting (1974-1975), and the Quinnipiac Division of the SCC Track & Field League (1991-1999).

During most of her career, records were not kept for girls’ and women’s athletic competitions.  Carolyn, however, garnered information about some of her teams through records in old yearbooks.  She has calculated that her tennis teams compiled a 90-16 record.  She also coached (1977-1978) the first three female athletes from Mercy High School to receive athletic scholarships!

The teams which Carolyn coached consistently qualified for post-season tournament play.  Individual tennis players and track & field athletes whom she coached were champions.  Most recently, her “jumpers” won division meets, qualified for both state open and New England, as did “our shot putter.”

Carolyn’s philosophy of women’s sports is one which all of us share: “I suspect there are many with more awards and longer records but no one feels more pleasure and personal reward than I do.  Thanks to whoever nominated me for giving me this opportunity to take a journey down memory lane.  It brought wonderful emotions.  It has been hard work at times but what fun I have had – being involved in women’s sports.  Thanks also to all my cohorts – who over the past 35 years have worked tirelessly to bring women’s sports so far.  Our work is not finished but we are ready for 2000!”