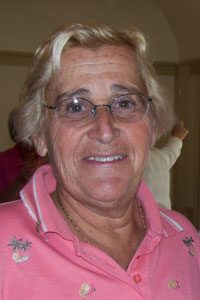 Carolyn is currently a member of the Department of Health and Physical Education at West Roxbury High School, West Roxbury, MA, where she is a teacher of health and physical education and performs the duties of the athletic director for the building.  For three years, Carolyn served as the Assistant Director of Physical Education, Athletics and Health in the Boston Public Schools.  Her many activities working as a mentor and educator for women’s athletics have included: working to establish a liaison between the Horace Mann School for the Deaf and Roslindale High School, serving as assigner for women’s basketball for the Boston Public Schools, and coaching women’s teams from local schools of nursing.

During her professional career, Carolyn has coached intramural, club, and varsity badminton, basketball, softball, track, and volleyball.  She has also officiated for the CYO leagues in Boston.  As a coach, Carolyn has had many of her teams compete in many championships: 1965-1973 the Boston Public Schools Cheerleading Championships and state championships in Spenser, MA, where her teams placed first and were runners-up.  Her basketball teams were undefeated in the Boston Public Schools in 1975 and 1976.  Records are not available, but her basketball teams had winning seasons from 1976-1979 and participated in post-season play in 1980.  Her volleyball teams won the Boston Park League Championship in 1968, 1969, and 1970.  In softball competitions, her teams won championships during the 1970’s.  Carolyn also coached badminton in the Park League Adult Badminton Program where her teams won the State Championships in 1969 and 1971.

Carolyn also officiated softball championships during the 1990’s.  She has been the assigner for women’s basketball for the Boston Public Schools – always making an effort to hire as many women officials as possible.

Her work in physical education and coaching has been recognized often.  She has received citations for her professional contributions from the Boston City Council, the Boston School Committee, the East Coast Association of Independent Schools for the Deaf, the New Agenda: Northeast (1990), and the Women’s Sports Foundation Certificate (1990).  She has also been listed in Who’s Who in Women, Education & Medicine, and the main edition.  Carolyn also served as the president of the Sargent College Alumni Association.

She has worked for many years with the MAHPERD, serving as treasurer, and with the DGWS as editor of the yearly brochure.  She also served as the representative from the Boston Public Schools on the New Agenda- Northeast planning committee to establish the Salute to Boston Women in Sport program.