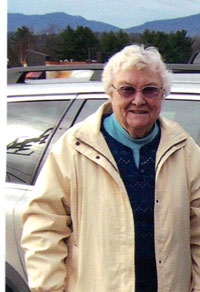 Carolyn is retired and a member of the Newport Retired Teachers Association, serving on the nominating committee and the program committee.  She began teaching in 1952 in Newburyport, MA.  She then moved to Saranac Lake, NY, Cooperstown, NY, Springfield, VT, and Newport, VT.  During her career, she taught physical education, health, and coached three seasons of field hockey, soccer, basketball, softball, and track & field.  She also taught cross country skiing, gymnastics, badminton, tennis, lacrosse, archery, and bowling.  She served as the chairperson for the Department of Health, Physical Education, Driver Education, and Living Arts.  She supervised student teachers, served on New England School Evaluation Teams, consultant for new buildings.  From 1949-1953, she was waterfront director at a summer girls’ camp.  She attended the National Aquatic School in South Hanson, MA, for three years.

Coaching records are unknown, but results were positive.  She officiated when needed as a basketball official in Massachusetts.  Carolyn also prepared students to officiate intramurals.  Her program also included gym shows in which she encouraged all students to participate.  She trained the ski team as race assistants – to set courses and to time events.  When monies were unavailable for uniforms and equipment, she raised the money.

Postseason, she participated as a coach in state championships field hockey.  Some of her teams became state champions, some tied (state co-champs) and some lost.  Some of her basketball teams were quarter finalists, and she timed for state tournament games.  Carolyn also worked on the State Field Hockey Committee, assigning teams and sites for state tournaments.  Carolyn is a member of Delta Kappa Gamma.

“I retired eleven years ago but continue to be an active follower and spectator of all girls’ sports.  The best decision I ever made was in 1948 when I chose to attend Bridgewater State College as a physical education student.   I have had a wonderful career and enjoyed so many students and colleagues over these forty years.  I do not believe I could have spent my life in a more worthwhile way.”