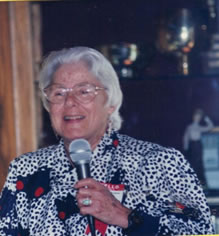 Her coaching career included basketball, field hockey, and synchronized swimming at Georgian Court College in Lakewood, NJ.  Caye held basketball and field hockey ratings and was the co-founder of the Southern MA Board of Officials.  She has also been a member of the AAHPERD-DGWS Field Hockey Committee and was field hockey chair for the MAHPERS Division for Girls’ and Women’s Sports.

Her involvement in professional associations, which has been extensive, includes the following:  Boston Field Hockey Association, The Massachusetts Association for Health, Physical Education, Recreation, and Dance, DGWS, EDA (secretary and president), The American Alliance for Health, Physical Education, Recreation, and Dance, and DGWS (chairperson for field hockey committee and chairperson for the visual aids section.  She was a member of the sub-committee for planning the first National Institute on Girls Sports which was held in Oklahoma, and delegate to the International Congress of Physical Education and Sports for Girls and Women which was held in Washington, DC.