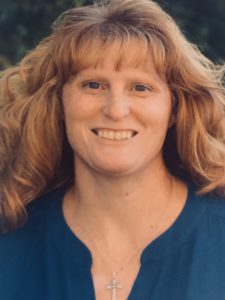 Cheryl Seavey has established herself as a consistent, supportive, and humble presence in the basketball journeys of young girls in her hometown of Bridgewater (MA). A 1989 graduate of Bridgewater- Raynham Regional High School (B-R), Cheryl was a captain and hall-of-fame inductee in three sports for the Trojans before continuing her education and basketball career at Stonehill College (MA).

Cheryl’s basketball coaching career began in 1997. She held positions at Middleboro High School (MA) and Whitman-Hanson Regional High School (MA), before becoming the JV coach at B-R in 2012. In 2015, she took on a role she has described as “a dream come true” when she was appointed the head varsity basketball coach for her beloved alma mater.

As captain of B-R’s 1989 MIAA Division I State semi-finalist basketball team, Cheryl’s teammates remember her as a fiercely competitive yet humble leader, and a dominant and steady presence in the paint on both ends of the court. One high school teammate describes Cheryl as having been “most in her element and full of joy when competition was the most intense.” Unsurprisingly, this descriptor is one that has also been attached to Seavey-coached B-R teams during her tenure.

At Stonehill, Cheryl played for fellow New Agenda Northeast Hall of Fame member, Paula Sullivan (1990). Through her coaching, Cheryl seeks to “carry on the lessons and values” of Coach Sullivan – her mentor. Like Coach Sullivan, Cheryl has established a team culture that promotes respectful relationships and a sense of family, while holding the young women who play for her to the highest standards both on and off the court. Cheryl is more than proud to
share with any audience that there are 22 National Honor Society inductees among the student-athletes she has coached at B-R. Cheryl is a humble and caring leader who is respected by all who have played with her or for her.

After graduating from Stonehill College with a degree in education, Cheryl co-founded a basketball camp for young girls in the Bridgewater and Raynham area. Undoubtedly, her efforts to build trusting relationships, develop foundational skills, and foster a deep love of the game in hundreds of young girls over the past 26 years have directly contributed to the recent successes
of her B-R teams. Since taking over as head coach, Cheryl’s B-R teams have won seven conference championships and made seven state tournament appearances. In 2020, BR won the MIAA Division I South Sectional Championship and Seavey was named the Massachusetts Basketball Coaches Association (MBCA) Girls Division I Coach of the Year.

Currently, Cheryl works for Brockton (MA) Public Schools as an elementary educator and holds a master’s degree in education from Fitchburg State University.