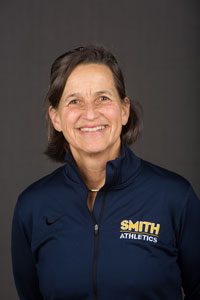 Christine, a 1976 graduate of Springfield College and a 1979 graduate of Smith College, is a member of the Department of Exercise and Sport Studies at Smith.

Christine has been active in professional associations including the Intercollegiate Tennis Coaches Association, women’s Division III National Ranking Chair, and Sports Commissioner-Elect and Executive Board member for MAIAW.

She has participated in numerous tennis seeding and selection and rules committees for local, regional, and collegiate tournaments, and has been the Co-Director of the winter youth development tennis program in Northampton, MA.  In recognition of her intensive involvement in tennis, she was presented the National UNTA/Volvo/ITCA coaches Community Service Award.
Christine is an active tennis participant as well as author of several tennis publications.