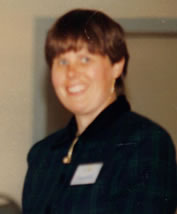 Chris is a teacher of health and physical education at Sterling Middle School, Quincy, MA.  She is also a volleyball coach and has been the Director of the Massachusetts Patriots Volleyball Program since 1985.  Chris has been a Junior Olympic Volleyball Coach since 1982.  For two years, she was a New England Regional Olympic Coordinator in charge of all of the junior programs.  Her responsibilities included training the junior players to officiate.  Tournament play at this level is officiated by the girls themselves.

Chris, a current member of MAHPERD, has served as the Vice-President for Girls and Women’s Sport for MAHPERD.  She is also a member of the USVBA, A.C.A.P., and AVCA.

She has not kept a record of her wins and losses.  Her 16 and Under team has been the New England Regional Champions since the inception of the tournament in 1988.  Her middle school team has won the City Title the past two years.

Her tournament/post-season play has included being assistant coach of the Quincy High School Girls Volleyball Team when they won the State Championship in 1992; Head Coach of the Massachusetts Patriots in a Volleyball Festival in Davis, California, and at the Lone Star Classic in Texas; the annual LIBA invitational in New York, the East Coast Championship Regional USVBA Nationals, Zone 1 Championships, and the Great Lakes Championships.

Chris has received the New England Regional Service Award for her leadership in volleyball and was named Sportswoman of the Year by the Northeast USVBA.