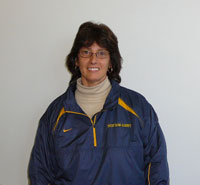 Cindy Tozzi is currently the field hockey and softball coach at Notre Dame Academy in Hingham, MA.  She is a graduate of Eastern Nazarene College with bachelor and master degrees.  Cindy began coaching softball, basketball, and volleyball in the early 1980’s at the high school and semi-pro levels.  She initiated NDA’s first soccer and field hockey teams in the early 1990’s.

Cindy is a member of the MA Field Hockey Coaches’ Association and the MA Softball Coaches’ Association.  She has coached field hockey since 1999, taking her teams to the Tournament in 2004. 2005 and 2006.  Her softball teams have qualified for tournament play every year since 2003.

In 2000, Cindy received the MIAA/New Agenda/ NAGWS Distinguished Service Award at Faneuil Hall, Boston.  In 2001, she was the MIAA/MA state NFCA Field Hockey Coach of the Year.

“I consider my role as mentor and advocate for the female athletes I’ve coached over the last 25 years to be an integral part of who I am and take this role very seriously.”