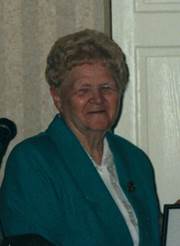 Claire Nolan has had a distinguished career as a teacher, coach, official, and administrator.  She is held in the most high esteem by her profession.  He life has been devoted to serving others.

Through the years, she has been especially concerned and involved in the promotion of equal opportunities for girls and women in physical education and sports.  The MAHPERD, MIAA, Boston Board of Officials, Boston University, CO, and New Agenda: Northeast have all honored her with awards for her outstanding contributions in this regard.  She has served on countless committees in all of the professional organizations to which she has belonged and has always given the utmost of her time and talents.  She often has worked behind the scenes to accomplish goals for the benefit of all.  She has been involved with community activities and has been a distinguished participant and prime mover in the area of golf for girls and women.

Her many committee experiences resulted in success for women in sports.  She served on a committee to draw up regulations for State Law 622.  She helped set guidelines for interscholastic athletics for girls.  Claire represented the Massachusetts DGWS to the MIAA Board of Control, served on the eligibility review board and sportsmanship committee, and was the site director for North Sectional and State volleyball and basketball tournaments.  She was instrumental in the hiring of a woman in the MIAA office.

Claire Nolan has received many honors: 1969 honorary life member of the Boston Board of Officials, 1970 CYO National Award for God and Youth, 1970 Boston University Dudley Allen Sargent Award, 1981 Boston University Sargent College Spirit Award, 1986 the MAHPERD Honor Award, and 1989 she was named the Teacher of the Year by the Special Education Parents in Waltham, MA.  In 1989 Clair was inducted into the New Agenda: Northeast women’s Hall of Fame.  In 1992 she was inducted as a charter member into the Matignon High School Hall of Fame.  Also in1992 she received the Boston University Hall of Fame William C. “Bill” French Memorial Award.

“Her tenacious drive to make things better for all students in physical education and sports was impressive.  She should be commended for her service to the profession and especially for her efforts in furthering the development of opportunities for girls and women.  As a former physical education teacher, coach and official, I recognize the value of her contributions and have seen the impact they have had in Massachusetts.” Rose Somensini, 1992.

The following was taken from the dedication from the 2007 New Agenda: Northeast  Hall of Fame program.
CLAIRE R. NOLAN
IN MEMORIAM

Claire R. Nolan was a highly respected and distinguished member of her profession and of the New Agenda: Northeast.
As a teacher, coach, official, and administrator, she dedicated her career to providing the best of opportunities for all students, especially advocating and promoting equality for girls and women in sports.
Her many honors and recognitions from a multitude of organizations attest to her involvement and success.

Susan is the Assistant Director of Athletics at Champlain College, Burlington, Vermont.  She has been the head coach of field hockey since 1982 and became the head coach of skiing in 1988.
As a member of the National Junior College Athletic Association, Region III, her teams have captured NJCAA National and Regional III championships.  In 1988 they captured the NJCAA National Alpine Championship.

From 1983 to 1988, Susan served as a United States Field Hockey Development coach, and was a clinician at the Vermont Field Hockey Coaches’ Clinics from 1984 through 1988.
Susan was recognized as the NJCAA “Coach of the Year” in 1986 and was inducted into the Johnson State College Athletic Hall of Fame.