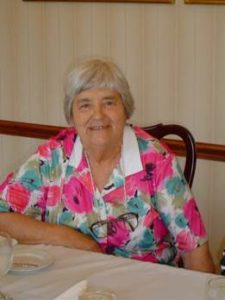 Clorinda has been retired for ten years from the Medford Public Schools where she taught physical education (K-8) and coached for 27 years.  She organized and ran in-school tournaments between the five elementary schools in volleyball, basketball, and speedball; organized the sixth graders to coach and officiate fourth grade kickball tournaments with other schools; organized a seventh and eighth grade peer groups and used Peer Leaders as assistants with an activity program for sixth, seventh, and eighth grades.  Her involvement in women’s sport has included coaching C.Y.O. basketball for the St. Charles, Woburn, basketball team (1948-1950); the Lynn Church League, basketball coach and official (194701950); an instructor and coach at the Charleston Girls; Club.  She coached field hockey, basketball, softball, swimming, and tumbling in Bennington, Vermont.  She coached cheerleading from 1950-1952.  Her basketball team was the Taconic League Champs in 1952.  From 1952-1956, Clorinda coached Brandeis University intramural basketball, volleyball, and fencing.  When the Pope John High School in Everett, MA, opened in 1966, Clorinda organized the Physical Education Department, started a Cheerleading Squad, and began an intramural program which included volleyball and basketball.

Clorinda has also worked with youth organizations including the CYO, the Boston Parks Department women’s leagues in basketball and softball, with the Girl Scouts, the Medford Girls’ Ice Hockey Team, and coached the Medford “Oleladies” softball and volleyball teams.

She has been recognized for her achievements in women’s sport.  In 1986, she was inducted into the Boston University Athletic Hall of Fame.  In 1951 she was a member of the U.S. Women’s Lacrosse Touring Team to Great Britain and Ireland.  In 1951 she was named the Teacher of the Year at Medford High School where, in 1992, the Clorinda Saragosa Award was established.  In 1990 Clorinda was inducted into the Medford High School Hall of Fame.