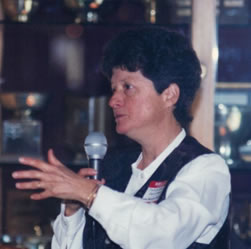 During the past twenty seven years, Cynthia has been a member of the Rhode Island sub-Committee for Girls’ Athletics.  She is currently the Director of slow-pitch softball, a member and two-time president of the Rhode Island High School Girls Basketball Coaches Association, and two-time chairperson of the Rhode Island Association of Girls’ and Women’s Sports.  Cynthia was a coach and organizer of the first Rhode Island Girls’ Basketball exchange program with Ireland, a co-founder of the first Rhode Island girls’ basketball statewide summer league, and has presented many clinics and workshops for the promotion of girls’ basketball, fast-pitch softball, and lacrosse.  In 1971 and 1972, Cynthia’s track & field teams won two state titles, her college team won two ECAC Division II fast pitch softball titles (1984, 1986), and were selected for EAIAW post season play at Glasboro State.  Her twenty-six year coaching career as the Smithfield High School girls’ varsity basketball coach includes four Class A state titles (1972, 1985, 1986, and 1988).  She has participated in post-season play during 24 of her 26 years of coaching.

Her many honors include the School Girls Coach of the Year, Class A-North Girls’ Basketball Coach of the Year, the Alice Sullivan Award for Service to Girls Sports in Rhode Island in 1993, and the award for Ethics and Sportsmanship by the Institute for International Sports.