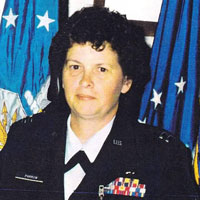 Darlene, an active duty officer in the U.S. Air Force, has been organizing and coaching military women’s sports teams in volleyball, basketball, and softball for the past eighteen years.  Since 1973 she has been a member of AAHPERD and a member of the Women’s Sports Foundation since 1974.

At all of her six operational base assignments, she has arranged league entries, arranged for team housing, transportation, practice and game facilities, sponsorships, uniforms, and publicity.  All this was done on an off-duty volunteer basis.

Darlene has been involved in championship, post-season, and tournament play in California, Korea, Illinois, and Louisiana.

In 1980, she was the recipient of the “Coach of the Year” award at Travis Air Force Base.

“Update from Dar Parrow (July, 2018): I was inducted just before I retired from the Air Force (stationed at Hanscom AFB and coached women’s sports at all the bases where I had been stationed).

After retiring I went to Springfield College and got my Masters and my Doctorate in Sport Psychology then left Massachusetts to return home to Oregon in 2002. Taught at the University of Portland for 7 years, then completely retired.”