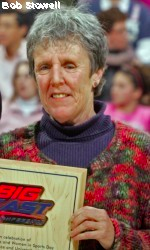 Diane has, during her 15 year career, coached at the University of Connecticut, amassing a coaching record of 212-61-27.  She has also served as assistant to the USFHA National Team Coach from 1976-1982.  For six years, she has served on the NCAA Field Hockey Committee.