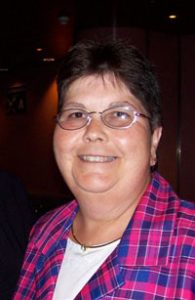 Diane Camacho says, in assessing her career that “she will always treasure the athletes she had the privilege to coach, fellow coaches she’s built friendships with along the way and learned from, but most of all the life long memories that have remained.”  These memories began as a “first” assistant for Field Hockey at her alma mater, Dartmouth H. S., and continued at Joseph Case High School in Swansea, MA, after graduation from Bridgewater State College.

As a basketball official, Diane began officiating while still in college.  She advanced to a local rating and finished her career as a state rated official.  While coaching field hockey at Case, Diane was involved with forming the MA South Sectional Field Hockey Association and was the South Coast Conference representative for many years.  She actively worked the Massachusetts South Sectional Field Hockey Association’s “Flick Off Clinic” for players as well as the “TNT” camp in New Bedford.  She was also involved in the “positive experiences” of coaching outside of Case in the Bay State Games, the Futures Program, and the Junior Olympic Program.

Diane is currently teaching biology to sophomores at Case H. S. and planning for her retirement.  She enjoys spending her time following the Connecticut Suns of the WNBA.