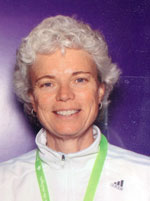 Diane has been officiating volleyball for over 17 years.  “I have been a member of the National Rating Team…and a clinician at a National Training Team Camp.” She has coached volleyball at Bridgewater State College and Stonehill College.  Additionally, she has coached a women’s volleyball team for the Bay State Games competition.

“Over my career as a volleyball official, I have tried to be involved with local as well as national professional organizations.  I believe in giving back to the sport and have dedicated and continue to dedicate much of my time to doing so.”

“My goal is always to help others through my involvement and by mentoring.”