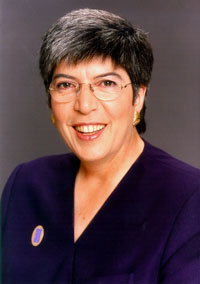 Donna A. Lopiano is the Executive Director of the Women’s Sports Foundation.  She received her bachelor’s degree from Southern Connecticut State University and her master and doctorate degrees from the University of Southern California.  She has been a college coach of men’s and women’s volleyball, and women’s basketball and softball.

She is also involved with many professional organizations which support women’s sport equity: the American Alliance for Health, Physical Education, Recreation, and Dance, the National Association of Collegiate Women Athletic Administrators, the Center for the Study of Sport in Society, the Center for Athletes Rights and Education, the Women in Sport and Events, the Women’s Sports Foundation, and the Institute for International Sport.

Donna Lopiano has received many recognitions and commendations for her extensive work as an advocate of sport equity for women, including: Sporting Goods Business Woman of the Year (1998), Connecticut Women’s Hall of Fame (1995), and the Guiding Women in Sport Award from the National Association for Girls and Women in Sport (1992).  The Sporting News has named her one of only six women among the “most powerful people in sports,”  College Sports Magazine ranks her among the “50 most influential people in college sports,” and the Sports Business Journal lists her among the “top 10 female sports executives” in the nation.