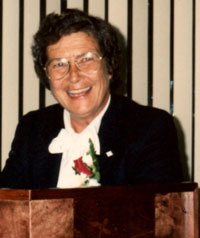 Dora is an Emeritus Professor from Southern Connecticut State University.  Her teaching career began in 1954 in Canton, CT, where she instituted interscholastic field hockey and softball for girls.  During her professional career, she coached field hickey for 17 years, softball for 10 years, basketball for 3 years, and badminton for 6 years.  Her field hockey teams played in several post-season tournaments.

Among her honors, Dora includes the Connecticut AHPERD Certificate of Appreciation (1970) and the Professional Honor Award (1975); recognition for outstanding contribution to field hockey from the CT Field Hockey Coaches’ Association (1985); honorary membership in the EAPECW (1990); and her induction into the Connecticut women’s Basketball Hall of Fame in 1991.