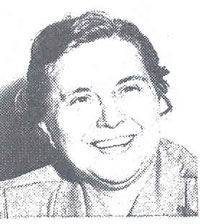 Doris Brooks, a graduate of Brockton High School (1922) and Sargent College (1927) became involved in WomanSport in the early 1920’s.

Following her graduation from Sargent College, Doris taught physical education in Abington and Brockton Public Schools and at Bridgewater State College.  At the time of her retirement in 1958, Doris was the director of physical education at Brockton High School.

IN 1935, Doris founded the Rockne Association, named for the famous Notre Dame football coach, Knute Rockne.  The purpose of the Association was to promote girls’ sports and pioneer camping and to build lasting friendships.  Rockne Girls were taught the principles of good sportsmanship and fair play.

The Rockne Association organized girls’ basketball and volleyball leagues at area churches and trained players, coaches, and referees until the mid-1960’s.  For many years, the Association headquarters were at the Rockne House on Main Street, Brockton.  A summer camp for the Association was established in the Myles Standish Reservation in South Carver.  In 1967, the camp was moved to Dublin, New Hampshire.

The Rockne Association, which began with the nucleus of 6 members, is still active and numbers about 300 members through the United States.  At its peak, it numbered over 500.  It continues to award ten $1,000 scholarships and six camperships each year at its annual banquet.
In 1954, Sargent College presented Doris Brooks with it most prestigious award, the Twiness Award.  She is also a member of the Brockton High School Hall of Fame.