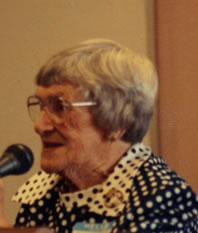 Doris is retired from the Lexington School Department where she taught physical education and coached field hockey for 29 years, basketball for 25 years, tennis for 17 years, and gymnastics for 2 years.  During those early years very few won/loss record were kept but opposing coaches and officials could verify that Lexington teams won 70% of their scheduled games.

Her energy carried her far beyond her involvement with the high school.  She was active with DGWS in the years when state tournament play was being organized.  She held office in the Boston and Northeast Field Hockey Associations, and served as state cheerleading chairperson from 1967 through 1969.  In 1968 she was a member of the Planning Committee for the DGWS Sports Leadership Conference for high school girls.  In 1970-71 she served as the field hockey commissioner, setting up schedules and assigning officials.  Many of the guidelines for interscholastic athletics for secondary school girls were established by a committee she served on from 1967 – 1970.  They were accepted and put into effect in 1970.