Dyanna’s involvement in women’s sport includes women’s soccer, softball, synchronized swimming, and cross-country skiing.  She is also very involved in her community of Hampton, NH, in advocating for women’s sports.  She is responsible for the starting of a Women’s and Girls’ in Sport Clinic which is held yearly – and the attendance for each of the six years it has been held increases significantly.  This program involves bringing the women’s varsity teams from the University of New Hampshire to conduct skill development clinics for the mothers and daughters in town.  It has been a very positive community event.

As with so many women coaches, win/loss records for teams “pre-Title IX” are not available.  Dyana recalls that one thing she does remember is that her players had fun during the “average” seasons of some wins and some losses.  Her advocacy of girls and women’s sport includes her support as the Director of Recreation for town-wide programs for girls and women, and her public voice when she speaks with girls’ groups, student groups, and adult groups advocating the need for sport programs for girls and women – programs which provide enjoyment, recreation, and competition which are concomitant with sport participation.  She has always encouraged young athletes to participate in as many different sports as possible.

As an athlete, Dyana has participated in softball tournaments as a teenager and soccer tournaments as an adult.  The New Hampshire All-State Girls’ Soccer League recognized her in 1984.  In 1984 she captained the New Hampshire Women’s cross country ski team.  She has also been named in Who’s Who as the National Cheerleading Award Winner.

Dyana’s involvement in sport began when her father taught her to ice skate at the age of 3, and nurtured her love of sport ever since.  Her goal is to provide the same positive experiences and enjoyment for girls and women in her community that she experienced as an athlete. 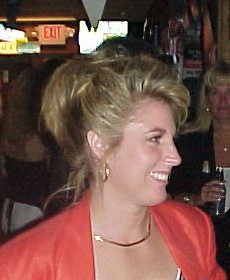