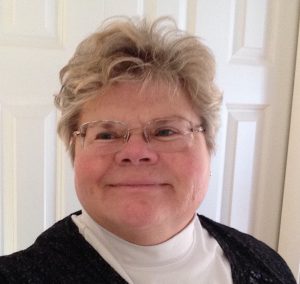 After graduating from Rhode Island College in 1979, Beth became a secondary mathematics teacher. She earned her masters degree in 1985, became a certified athletic administrator in 2009 and then became a certified interscholastic coach in 2011.

Beth’s advocacy and involvement in sport is extensive. At the high school level she coached track and field, slow pitch softball, basketball, and boys’ and girls’ tennis.  She was  an assistant fastpitch softball coach at Rhode Island College for two years. From 1980-1985 she was a state rated official in both slowpitch and fastpitch softball; from 1983-1995 she was a college softball official and officiated the 1994 Ivy League Championship. She served as associate athletic director at Warren High School (1990-1993) and then became the athletic administrator at Mt. Hope H. S. until her retirement in 2012.

Although retired, she continues to provide her expertise for student-athletes as a member of the Rhode Island Interscholastic Athletic Association. She was the first RI interscholastic director of fastpitch softball and served on the sub-committee for athletics to the principals’ committee during the same time. From 2010-2015 she served as co-director of tennis, gymnastics, fastpitch softball and director of cheerleading.  Beth is the recording secretary for the athletic administrators’ association executive board; she is the executive director and corresponding secretary for the awards committee. After “retiring” in 2012, Elizabeth became a member of the National Interscholastic Athletic Administrators’ Association and is serving the 4th of a 5 year term on the NIAAA Hall of Fame Committee. She is also serving a 2 year term on the National Executive Directors’ Committee Board.

Beth has been recognized for the following:

Beth credits her 40 plus years as an educator, coach, official and administrator to her high school teacher, coach and mentor Ann Chandler Morris, Warren High School.

“There is just something that she instilled in me while I was a student-athlete and then as a colleague that stayed with me through the years of my involvement in athletics as a coach and administrator.”