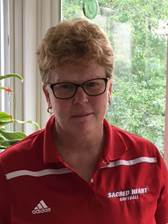 After graduating from Sacred Heart University (CT) in 1985, Elizabeth “Bippy” Luckie was unsure of her future.  Then came the call from the SHU athletic director offering her a job as assistant athletic director and head softball and volleyball coach.  Her life became more stable as she established herself as both a coach and athletic administrator at the college level.
For over 30 years, “Bippy” has served Sacred Heart University.  As an administrator she has served as Compliance Officer, Senior Women’s Administrator, Budget Director, and Sports Administrator.  In 2000 she assisted in the transition of SHU softball to the DI level.  As a softball coach, she took the team to the NCAA Regionals in 2009 and coached the only team in SHU history that has won a NCAA DI tournament game in a team sport.  “Bippy” was Coach of the Year in 2009 and 2018, inducted into the CT Scholastic and Collegiate Hall of Fame in 1997, and inducted into the inaugural Hall of Fame at JCC (The Community College which she attended in 1980-1981 before SHU).
“Bippy” is very proud that she both played and coached at Sacred Heart University.  Teaching these young women “not only about the game, but more importantly to be good people” is very basic to her philosophy.  She knows the impact she has made on the young women she coached.  Most of them come back to the SHU alumni game and reception and continue to give back to the program.
“We continue to tell our young women that you won’t remember the wins and losses, but you will remember the friendships that have formed along the way and you will have most of these friendships for the rest of your lives.”