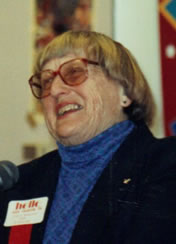 Emily is currently a professor in the School of Education, Boston University, where in addition to teaching in the physical education program, she serves on many university-level committees which are related to women’s athletics, curriculum, and the coordination of programs between the University and the Boston Public Schools.
Since the early 1940’s, Emily has been associated with coaching and officiating lacrosse, field hockey, sailing, skiing, and squash.  She also chaired numerous committees associated with these sports.  Many of her field hockey and lacrosse officiating assignments have taken her abroad to such places as Barbados, Trinidad, England, and Amsterdam.

Emily competed in Boston and Northeast Field Hockey from 1943 to 1970 and lacrosse from 1948 to 1968.  She was a member of the United States Wolfe-Noel Touring Squash Team in 1961.  She was designated as National Sailor in 1949, 1950, 1952, and 1969, and was the regional winner six times and the association winner 14 times.  Emmie has also been the chairperson of the National Women’s Championship Sailing Program and received the Mrs. Charles Francis Adams Cup in 1988 through 1992.

Among the many honors and recognitions received is her rating as a National Honorary Umpire in the USFHA and the USWLA, her induction into the Marblehead Sailing Hall of Fame, and her Honorary Alumnae Award for outstanding service from Skidmore College.