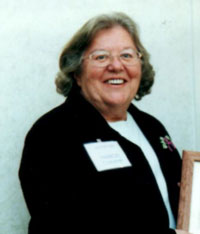 Frances began her professional career as a part-time instructor with the Marlboro Recreation Department from 1952-1956 while attending college.  She is a member of the class of 1956, Boston-Bouve School.  During her extensive professional career, she served as the director of physical education for girls at Somerset High School, where she also coached all girls’ sports from 1956-1970.  During that time, she also coached several girls’ AAU track meets during the summers from 1956-1967.

In 1969, following her recuperation from a swimming injury, she changed positions and moved to Westborough Junior High School where she taught physical education and directed a year-round intramural program (1970-1988).

Frances coached during the period when records for girls’ athletics were not kept.  Each of her teams at Somerset High School – field hockey, volleyball, basketball, and softball – won at least a total of 100 games.  Her teams won a total of 25 league championships and were runners-up 19 times.  Her coaching record at Westborough High School includes a field hockey record above 500% and from 1976-1988 her volleyball teams were perennial runners-up, but there are no records.