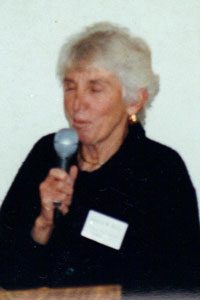 Gailen has had extensive involvement in WomanSport.  In addition to her work as a physical education teacher, she has been head coach of field hockey and tennis for thirty-three years (1964-1997).  She has served as chairwoman of the National Girls and Women in Sport Day, 1994 and 1995; on the Vermont Headmasters’ Committee on Women in Sport; an instructor at the Middlebury College Snow Bowl Ski School, 1966-1997; and has supervised the Middlebury Recreation Department field hockey instructional program for girls in grades 4, 5, and 6.  During the summer, Gailen is a tennis player and is the captain of the United States Tennis Association adult and senior 4.0 women’s tennis team.

Gailen has been designated the Division I Field Hockey Coach of the Year in 1979, 1987, and 1996.  She received the Outstanding Service Award from the Vermont Association for Health, Physical Education, Recreation, and Dance in 1984; was listed in the December 2, 1996, issue of Sports Illustrated “Faces in the Crowd.”  The Scoreboard and Jette Hockey Field were dedicated in her honor in 1995.