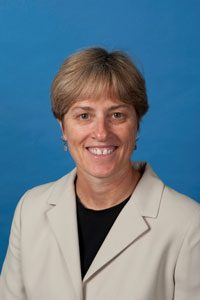 A graduate of the Eastern Illinois University with a BS and MS in 1984, Gina has been involved in girls’ and women’s sports in the New England area for 25 years.  She was the head coach of women’s cross country and assistant coach of track & field at the University of Vermont from 1988 to1992.  From 1992 to 1999 Gina was head coach of women’s cross country and track & field at the University of New Hampshire.  After a 3 year stint as coordinator of CHAMPS/Life Skills at Arizona State University, Gina returned to the University of Rhode Island as Academic Advisor/Learning Specialist for Student-Athletes (2002-2008) and then in 2008 became the Associate Athletic Director – her current position.

Gina is an active member in many professional organizations, most with emphasis on women’s issues.  She currently holds memberships in the National Association of Collegiate Women Athletic Administrators, the URI Association for Professional and Academic Women (serving as President 2007-2008), the URI President’s Commission on the Status of Women, the Atlantic 10 Conference Sport Committee (CO-Chair Men’s & Women’s Track & Field), the NCAA Division I Men’s & Women’s Track & Field Committee, and the National Association of Collegiate Directors of Athletics.

Gina’s awards are numerous.  She has been the Cross Country Coach of the Year in both the North Atlantic Conference and the America East Conference.  She received the CHAMPS/Life Skills Program of Excellence Award from the NCAA Division 1A Athletic Directors’ Association.  In 2001 she received the Erin S. Murphy Intergroup Relations Service Award (commitment to campus-wide diversity) and the Student Affairs Tribute to University Staff Award while at Arizona State University.

“Throughout my career as a collegiate athletic administrator I’ve had the opportunity to mentor a variety of colleagues, student-athletes, and women coaches.”