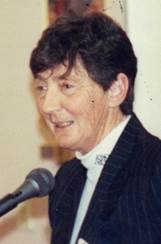 For 26 years, Gladys taught physical education and coached field hockey, basketball and softball at the high school and college levels.  During many of these years she served on a pro bono basis for the sake of the sport and her athletes.

Gladys, an active official in basketball, volleyball, and field hockey for many years, shared her expertise with many novice officials and participated in retraining of officials during rule change years, not only in Rhode Island, but in neighboring states as well.

As an athlete, Gladys played on the STAC fast pitch softball teams for 15 years and for 15 years they were state champs.  She played field hockey with the Rhode Island field hockey team and, for 18 years, she played and officiated in basketball for the Bristol, Rhode Island, women’s New England championship basketball team, serving as a player/coach for 3 years.  She also played basketball for the CT women’s New England championship basketball team for 4 years (1956-1959) during which time they were all-star teams.