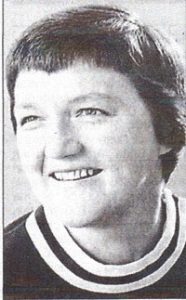 Helen “Spence” Spencer has been involved with girls’ and women’s sport and physical education since 1949, and with officiating since 1948 when she was still in college.  She coached basketball and softball from 1949-1951 at Delmar, Delaware, and coached and officiated basketball, softball, and field hockey from 1951-1956 at Valley Regional High School in Connecticut.

From 1956-1960 Spence was involved with women’s athletics at Skidmore College where she worked with basketball and field hockey and organized field days for her students.  She served as chairperson of the Saratoga Springs Board of Women Officials, chairperson for field hockey and basketball, and ran basketball rating clinics for new officials.  She then moved to the University of California, Santa Barbara, where she organized golf, badminton, and volleyball tournaments and coached field hockey.  From UCSB, Spence moved to Arnold College where she developed teams in field hockey, basketball, softball, volleyball, golf and tennis and officiated basketball in Fairfield and New Haven counties.

She has been affiliated with the Scranton-Wilkes Barre Board of Women Officials (field hockey, basketball) and with the Shoreline League for basketball, field hockey and softball, serving as a coach and official.  She played field hockey for Northeast Field Hockey and served on the Mohawk Field Hockey Board (president 1959-1960).  In 1961-1962 she founded and chaired the South Western Connecticut Board of women Officials.  She served as president (1962), ratings chairperson for basketball, and officiated high school basketball.

During her first year of coaching (1950-1951), her basketball team won the first tournament game (there were no championships for girls in those days).  During her last years at the Valley Regionals, her basketball, field hockey, and softball teams were undefeated.  While working at Arnold College, CT, the women coaches organized the first state track & field meet for high school girls.  Spence organized the Nutmeg Conference for women college chairpersons to encourage intercollegiate athletics for college women. “In the early 1960’s I was chair of the principles and techniques of officiating for DGWS and ran several clinics for umpires as the rules changed.” She also served as a consultant for Title IX cases and for the New Haven firefighters and at Stratford High School for women coaches and girls’ teams.  “We had the largest Title IX lawsuit in the USA at that time.”

Spence has been the recipient of many awards and recognitions, including: induction into the University of Bridgeport Basketball Hall of Fame (1998) and the Connecticut women’s Field Hockey Hall of Fame.  She was the recipient of the Danforth Grant from Skidmore College for “contributions in sports to high school girls in a democratic society” in 1959.  She received the Merit Award from the Right to Work committee in 1976 and was awarded honorary life membership by the Southwest Connecticut Board of Women Officials.  She has been active as a speaker with IAPESGW, presenting papers which spoke to women in sport at two international conferences, at AAHPERD national conventions, and at local/state conventions.  She has written four books and published articles in numerous professional journals, each of which addressed equity issues.