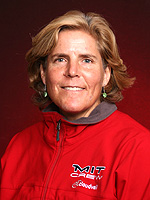 Holly began her rowing career while a student at Mt. Holyoke College.  In 1984, at the Los Angeles Olympic Games, she captained the women’s gold medal rowing team.  Since then, she has competed on five national teams, taking 1 bronze and 3 silver World Championship medals, in addition to her Olympic Gold.

She has served as the coach of Harvard, the 1990 Women’s National Rowing Team, at the Boston Rowing Center, at Mt. Holyoke College, and for the Pioneer Valley Rowing Association.  Holly is on the board of directors for the Charles River Regatta Trust, a local program which makes rowing more accessible to inner-city students.

Currently, Holly is in Ann Arbor, MI, building a community rowing program.  Prior to her moving to Michigan, she was a member of Northeastern University’s Project Teamwork, a multi-racial and multi-gender team of former professional and Olympic athletes who work with elementary, middle , and high school students to educate them concerning racism, gender discrimination and bias, homophobia, religious tolerance, and other forms of discrimination.