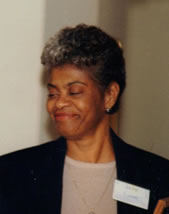 Jackie is currently the Head Gymnastics Coach at Brown University, a position she has held since 1972.  She is also the competition director for the Y.W.C.A. program (1988-present).  Since 1969, she has been a NAWGJ rated official and, since 1980, a national high school rated official.

Her league/board affiliations include the National High School Foundation where she serves as the Regional Chair (1995-present) and the State NAWGC where she serves on the Education Committee.  She is also affiliated with the Ivy League.  Jackie is a candidate for a seat on the Advisory Committee of the Women’s Sports Foundation and is a member of the National Association of Collegiate Gymnastic Coaches for Women.

Her expertise and success in gymnastics have been acknowledged at several levels.  She has received the NACGS-W Recognition Award and she has been presented the USAG Regional and State Awards.  Jackie is also listed in Who’s Who in American Women.

During the past five years, she has been involved in a Title IX suit against Brown University which is on appeal by the defendants.