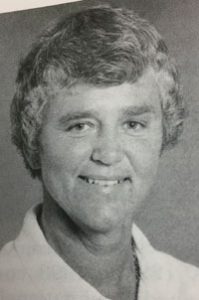 Janet, a graduate of Nebraska State Teachers’ College, has taught at the University of Maine, Orono, since 1966 where she has served as a faculty member in the physical education professional preparation program.  Prior to that, she was a faculty member in Des Moines, Iowa, and Winterport, Maine.

Her coaching career has included volleyball, softball, and field hockey.  She holds a USVBA Level 1 coaching certificate, and her volleyball career spans 11 years.  From 1971-1976 and 1978-1982 her volleyball teams were state champions.

From 1973 to the present, Janet has been head softball coach.  From 1973-1978 her teams were slow pitch state champions and in 1977 were New England representatives to the National Tournament.  In 1982 her team was the Maine Fast Pitch Champions and the ECAC Division I Champions in 1984 and 1987.

As an athlete, Janet has competed in ASA softball and in AAU basketball in the Midwest.​