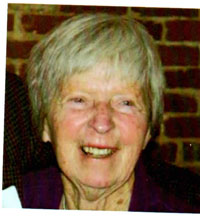 Janice has retired as a physical educator from Winchester High School.  Prior to her tenure at Winchester, she taught physical education at the Lincoln School in Providence, RI, and at Newton, MA, High School.  Her extensive coaching experience includes: field hockey, basketball, tennis at Winchester, field hockey at the Merestead Field Hockey and Lacrosse Camp, the CranBarry Field Hockey Camp in San Jose, CA, and the Cape Cod Field Hockey Camp.  Her officiating experience includes: field hockey, basketball, and softball.  She was a member of the Buzzards Bay Women Officials and officiated for the Middlesex League.

During her coaching career, no formal tournament play was available for girls.  No records were kept of her teams achievements, but she does state that her teams rarely lost.  During her last year of coaching, her field hockey, basketball and tennis teams won the league championships.

Jan has been involved in professional organizations. She has been a member of MAHPERD and DGWS where she served at the vice president.  She and two friends have established a tennis camp for high school girls.

Jan has been recognized by CTAPE (MAHPERD).  She was presented the Jack Knight Award (1980) by the MAHPERD CTAPE, the MAHPERD Honor Award (1983), the Unsung Hero Award from the MIAA in 1987, and she was inducted into the Winchester High School Hall of Fame in 1996.