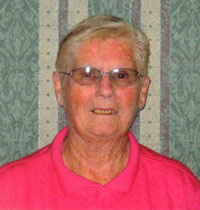 Jean Cole has been instrumental in creating girls’ and women’s sports programs in Newton since 1969.  She has been an advocate for girls and women through Newton Parks and Recreation since she was 17 years old.  She began as a recreation leader, coaching softball, volleyball, and basketball, and moved up to become a recreation manager.  Before retiring, Jean was the manager of the Newton North High School athletic complex on evenings and weekends, as well as the manager of the Gath outdoor pool in the summer.

If you take a ride by the Russell J. Halloran Field Complex in Newton on any night you will see the activity under the lighted playing fields there. She was a force behind the lighted fields and the softball field there was named the “Jean Hays Cole Softball Field” in her honor in 1988.  This is one of the rare fields in New England named after a woman.

Jean received the Judge Flashner Award for working with Newton youth in 1989.  She received the Mary Lou O’Halloran Award in 1990 for demonstrating “courage, determination, commitment to a cause, enthusiasm and team spirit” in women’s sports.  In 2007 Jean received the Russell J. Halloran award honoring her overall work with the youth of Newton.

An athlete in her own right, she has played in the Senior Olympics Volleyball Tournament for 6 years.  During this time Jean was the phantom editor of the weekly volleyball newspaper.  As a player, coach, and official, Jean Cole’s main emphasis was always on sportsmanship through competition.