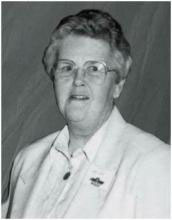 Jean Hunt graduated from Sargent College of Boston University with a Bachelor of Science in Physical Education in 1952.  That same year she began her teaching and coaching career at Litchfield High School in Connecticut.  After five years she moved to Farmington High School, CT, where she stayed for 30 years until she retired in 1987.

Jean grew up in Lexington, MA.  She began playing the bugle as a youngster and was always in the town parades.  Following the parades, Jean played her bugle on the town common.  Many years later, she picked up the bugle again as the “wake up” caller for college students at the Sargent Summer Camp.

“When we first started basketball in the 1950s and ‘60s, we were only able to use the gym on Tuesday and Friday afternoons because the boys played their games at night. We played maybe six games in a season.”

Hunt officiated basketball for 24 years at both the high school and college level. She served as Chairman of the Connecticut Board of Women Officials and as CIAC Committee Member for Tournament Play.

“Jean has had an illustrious career as a teacher, coach, official, and mentor,” related longtime classmate and friend, Rose Somensini.

After a career in Connecticut, Jean has recently moved back to Massachusetts to be near family and friends.  She is currently living in Lexington, MA.