Jeanne is a Professor of Physical Education atNortheastern University in Boston, Massachusetts.  He career has included extensive involvement in the teaching of physical education and in the coaching and administration of women’s athletics.  She has taught at both the high school and college levels.  Jeanne is the former director of Women’s Athletics at Northeastern University.  She has coached at the collegiate level and has taken her team to the first National Women’s Invitational Basketball Tournament in 1969 and was the director and host of the second National Women’s Invitational Basketball Tournament at Northeastern University in 1970.  She has been manager of the United States Women’s Basketball Team during competition in Montreal, Moscow, and South America.  Jeanne has held national ratings in basketball, softball, and volleyball, and holds an honorary life membership with the Boston Board of Officials. 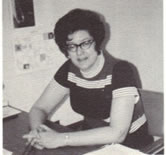